The Bank continues to develop and maintain good communication with regulators, investors, within capital market, and public in general. In this regard, the Bank has a Corporate Secretary who plays an important role in ensuring smooth communication between the Bank and its stakeholders and ensuring the delivery of information in a timely and accurate manner to all stakeholders. 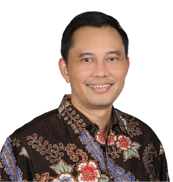 Harris P. Simanjuntak, started his career at PT Bank Maybank Indonesia, Tbk. as Investor Relations Department Head in 2003 and was entrusted with being responsible as Head of the Corporate Secretary unit for 8 years since 2007. In 2015, he was trusted to lead Anti-Money Laundering & Assurance division, and before being appointed as Corporate Secretary, he was the Head of Compliance Regulatory Affair.

He acts as a liaison between PT Bank Maybank Indonesia, Tbk. with Capital Market Authority, Bank Indonesia, Indonesia Stock Exchange, and other relevant institutions. He monitors the Bank’s compliance with capital market regulations and ensures the Bank’s management understands the changes and their implications.

Harris P. Simanjuntak has been appointed as the Company’s Corporate Secretary, effective from 3 December 2020.

Legal basis for the appointment of Harris P.  Simanjuntak as Corporate Secretary is the Board of Directors Decree of PT Bank Maybank Indonesia, Tbk. No. SK.2020.002/DIR COMPLIANCE dated 2 December 2020. The appointment has been reported to OJK and announced to the public through IDXNet (e-reporting).

In general, roles and responsibilities of the Corporate Secretary are as follows: